Brussels, 10 September 2010 – EURid, the registry for the .eu top-level domain (TLD), announced today that more than one million .eu domain names have been registered in Germany.

The .eu TLD passed this milestone on 7 September 2010 when a German company registered the one millionth .eu domain name in Germany. This landmark registration was processed by the .eu accredited registrar STRATO AG. German registrants now hold 31% of the total 3.2 million .eu registered domain names.

“Germany plays an important part in .eu’s success as German residents and companies register the most .eu domain names. To reach one million .eu domain names in Germany is a noteworthy achievement," said Marc Van Wesemael, General Manager of EURid.

“As one of the leading registrars for .eu, we are very happy to have registered the one millionth .eu domain name in Germany,” said Christian Müller, board member of STRATO AG. “Germany is the biggest market for .eu and STRATO is very proud that we can contribute to this success. We look forward to a continued close partnership with EURid.”

EURid’s full report for Q2 2010 is available for download. 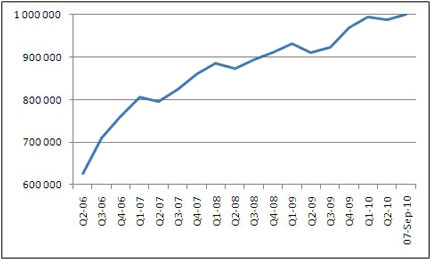